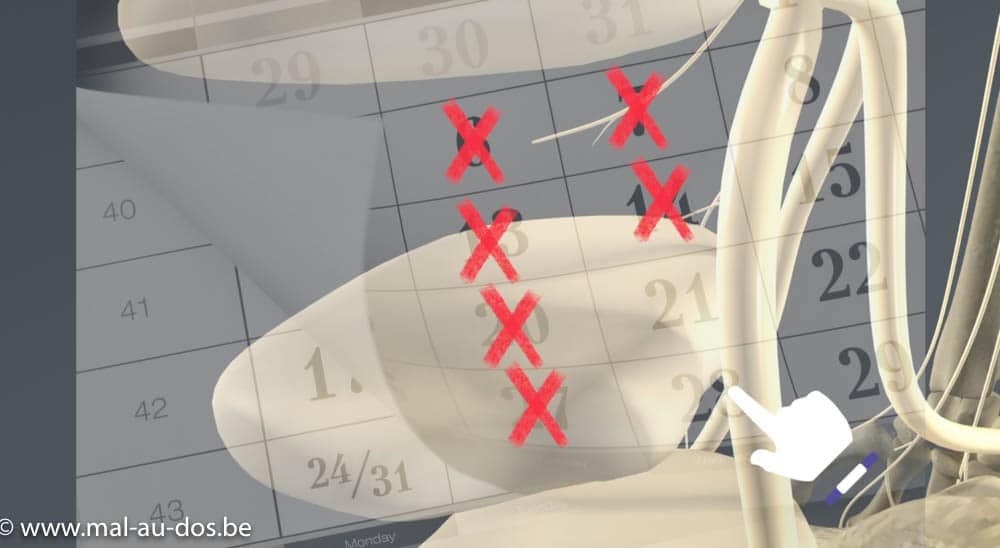 Sciatica is the term describing a pain loss of sensitivity, weakness radiating along the sciatic nerve, between the lower back and the leg passing through the buttock.
Watch the video to understand what’s happening when part of a herniated disc compresses the spinal nerve root.

What is Sciatica and how long does it last?

The term sciatica refers to pain in one of the lower limbs that lasts from a few days to several weeks, depending on its cause and what is done (or not) to treat it.

This pain is caused by irritation/inflammation of the sciatic nerve. Pain from sciatica is usually felt from the lower back (area of the lumbar vertebrae) to behind the thigh and can radiate down below the knee.
The pain of sciatica can also cause pain in the calf and even pain in the foot.

Video: what is sciatica?

The sciatic nerve is the largest in the body and originates in the nerve roots of the lumbar spinal cord (lower back) and extends into the buttocks, with nerve endings extending into the lower limb.

Driving while sitting too close to the steering wheel (and thus with the legs tightly folded) increases the pain of sciatica while moving back the seat and stretching the leg relieves this pain.
As a general rule, it is advisable to change positions as often as possible to relieve pain as much as possible.

Sciatica is itself a symptom, a sign that something is wrong in the lower back.

Sciatica can also have another cause, unrelated to disc dysfunction and characterized by similar pains and known as the syndrome of the piriformis syndrome.

In most cases, sciatica is the result of a lumbar disc herniation that presses and compresses the sciatic nerve, causing inflammation and irritation that is responsible for the pain.
The following pathologies can also lead to sciatica:

In pregnant women, sciatica can occur following the irritation of the sciatic nerve during pregnancy.

What is sciatica & why doest it hurt ?

How long does a sciatica last?

Sciatica lasts from a few days to a few weeks. In the majority of cases, it will go away by itself, as it has came: the problem that triggered it must be solved: in the case of a herniated disc, for example, the herniated disc must stop putting  pressure on the nerve.

Sciatica lasts longer or will not go away if one doesn’t adapt their behavior, so as not to perform the actions or action that trigger it.

If You don’t pay attention to the way You bend down, to the physical efforts You make in everyday life, to the number of hours that You sit on a day, You postpone the healing and the longer the sciatica lasts, the harder it is to go away.

If sciatica is associated with pain in the lower back and tingling, numbness, loss of sensitivity in the leg or foot, it is unlikely to go away in 3 days

These are symptoms of a herniated disc that is about to occur. At least that’s how it happened for me.
These symptoms gradually increased, over 15 days, until the herniated part of the intervertebral disc came to press against the sciatic nerve.

If I had gone see a doctor right away, I would have been prepared for what was about to happen.

And it probably would have been a lot easier to deal with without the surprise effect that makes things so much more complicated.

The second mistake I made when I realized what was happening to me was to arrange my sedentary lifestyle: do everything possible to stay as still and comfortable as possible.

It was really painful, 24 hours a day, 7 days a week
And in my mind, I could see myself staying like that for an indefinite period…

New ergonomic office chair, new mattress, ergonomic pillows, better sofa: I was convinced that there was nothing to do and that until it got better, it was probably best to avoid moving.

That was so wrong! ☹️

You’ll want to treat the herniated disc first. Unless there is an emergency, fortunately quite uncommon, the treatment of a herniated disc is always conservative at first (rest, anti-inflammatory medication and physical therapy sessions)

To treat herniated sciatica, you need rest, common sense and patience. The symptoms and pain associated with sciatica disappear when the herniated part of the intervertebral disc stops compressing the nerve root.

This happens in the vast majority of cases, although it often takes several weeks.

Rest does not mean that you have to stay without doing anything nor moving.

“Au contraire”, if the pain level permits, you should try to move. Gently as often as possible.

Avoid staying prostrated for hours in an chair or on a couch.
Get outside, walk around. A little, a lot, do whatever you can, without trying too hard, but most of all DO NOT STAND STILL.

Walking is actually the best thing you can do to get rid of your sciatica.

The rest is a matter of common sense. And patience

Avoid physical efforts and any activity that could slow down or compromise the healing process: no gardening, no sports…

Work, fatigue, pain…everything, absolutely everything pushes us to sit down and ultimately stay still as much as we can, whereas due to the increased pressure applied by the spine on the lumbar area when sitting, when you have sciatica and herniated disc, extended sitting only makes the problem worse and delays recovery.

Things started to improve significantly from the moment I decided to literally REFUSE to sit down.

Not forever of course, but for that period of time when the pain was constant and at the limit of what I could bear, I said to myself, “I’m going to try to avoid sitting down to see if it gets better.”

And not only is there a way to stay without sitting even with sciatica and a double herniated disc, but it does get better. A lot better. Almost instantaneously!

Because it’s a turnaround situation. A feeling of finally having found a solution to a problem that was screwing up my life. Out of the blue, I felt like I was able to take back control of the situation.

From then on, things started to improve, gradually.

At first, deciding never to sit down may seem like an unrealistic solution, but you have to try, especially at the beginning, during the period when the pain is severe.

And as soon as it gets a little better, you have to try to find a balance between sitting and standing, leaning on a piece of furniture, against a wall, a doorframe: every minute spent without sitting counts as a victory and You quickly get used to it.

It’s like when you quit smoking. You think it’s not possible and in fact you realize that not only is it possible, but you feel much better.

The difference is that, you can’t start smoking again after a few weeks, while, sooner or later, you can start sitting down again and get back to a normal life 😀

Surgery As The Last Option

If the situation doesn’t improve after 3 months and / or sciatica is too painful and prevents normal life and activities, surgery may be considered. 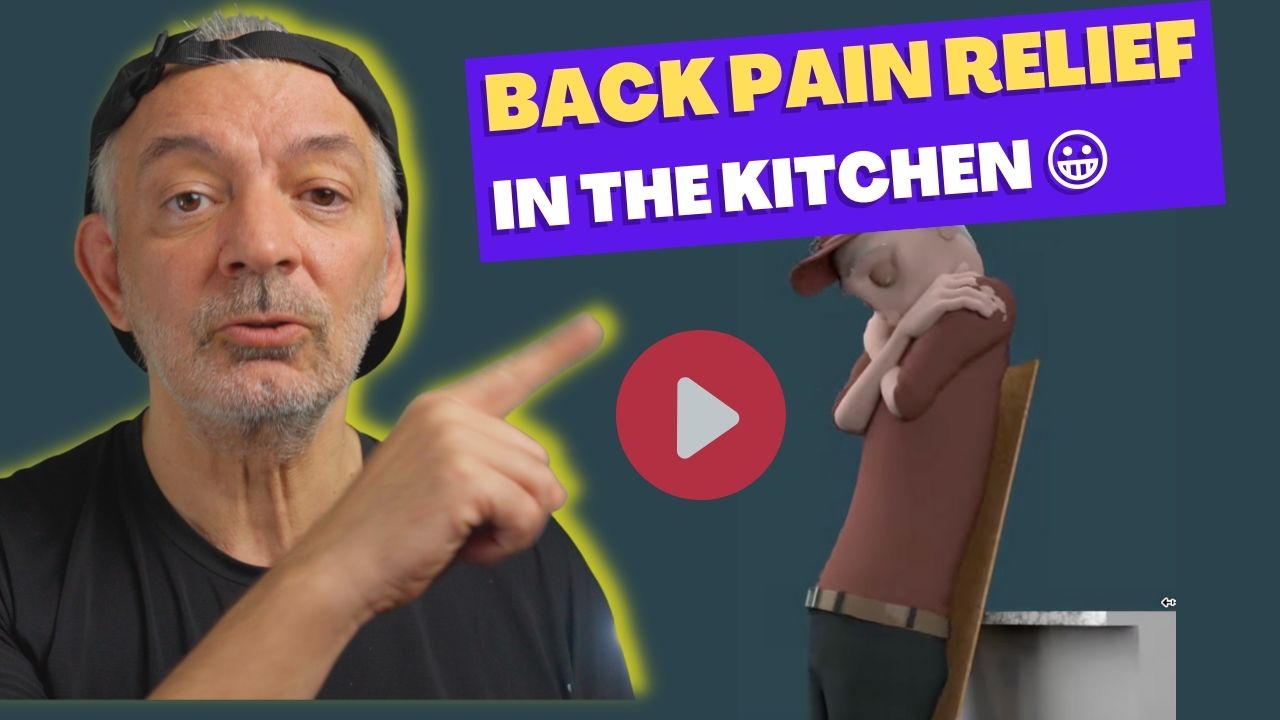