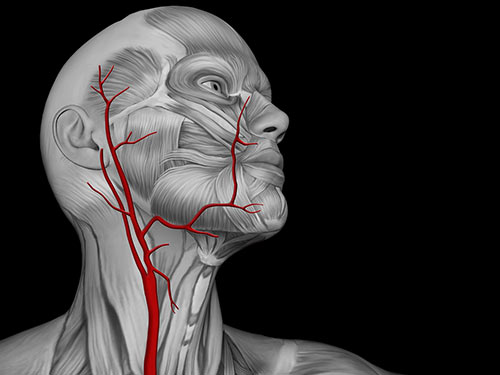 So forward head posture is the reason why I have constant headaches and pain in my neck. Have you read this previous post about pain behind ears and stiff neck when turning head yet?
If not, I suggest you read it because this blog post is kind of a follow-up
During the last few months, I’ve had consultations with several doctors, all specialized in their own discipline.
My goal was to eliminate every possible cause of constant headaches & neck pain, because it’s making my life difficult and this has to stop.

Here’s the list of the doctors I’ve consulted. I figured at some point one of them would tell me: “Oh I’ve seen this before, here’s what you need to do”.
I don’t know if I’ve seen them all, but it’s not like there 25 different medical disciplines that can treat this problem.

I know it seems like a strange idea, but I decided to see a dermatologist because when massaging my skull and using my finger to narrow down on a particular “sweet spot” which actually hurt like hell when I touched it, it turned out there was like a bump or lump at the base of my skull. And treating this lump would ease the headache and relieve me from the tensions and pain.

I first start by gently massaging this lump at the base of my skull, but then I found out it was more effective to apply some iso betadine on it. This would make the lump go away for a while.

So I took an appointment with a dermatologist. Of course, on the day of the appointment, there was no lump at the base of my skull so…I looked like an idiot, took the prescription for some fungus cream, something she gave him, and went home.
Which reminds me: that dermatologist suggested I try acupuncture to solve this and that I haven’t done yet!

I also wanted to rule out any possible throat problem from causing these headaches & neck pain.  Mainly because there is another very painful spot near my throat: this one is so painful when I touch it, it would freak me out! I thought maybe I had throat cancer or something.
So, better safe than sorry, I took an appointment with a throat specialist. Which examined my throat by putting…hmmm…what was that again? A tiny wired camera in my nose and went down to the throat.
There was nothing to see, so ok, good news, I don’t have throat cancer, and nothing’s wrong with my throat but what is this spot that hurts like hell and why am I getting some relief in my neck and my head when I massage my throat?
The doctor suggest that I  see a neurologist: there is one in the same medical facility which specializes in treating headaches & migraines, so, i took an appointment with him.

Next doctor: the neurologist

I wrote a blog post back then, about what’s going on during the first examination by a neurologist.

He prescribed some painkillers, some Redomex 10mg to help me sleep, a head MRI and 9 sessions with a physical therapist because I have a poor posture and fixing that poor posture could be a solution to my headaches & neck problems.
It took a while to get an appointment for the head MRI, but I finally had one and again, good news: nothing’s wrong inside my head or in my brain.
No brain damage whatsoever that seems to be the cause of the headaches, ok…interesting, but that doesn’t answer the question, does it?

A vascular surgeon is a doctor who treats health issues related to the vascular system, veins & arteries. Now, how is this relevant to my headaches and neck pain problems do you think?
Well, if you look at the picture above, where I stick my fingers near my throat. As I said, this is a painful spot and massaging it gives me some relief.

But, if insist to much on massaging that area, I get to a point where I’m close to fainting. It’s a bit scary because sometimes I do this while I’m driving, and all of a sudden, I can see it coming, and I need to release immediately before I lose consciousness while driving!

So I talked to the doctors, and the physical therapist about these near fainting episodes and they all gave me the same answer: this is a heavily vascular area, and I should not be touching that otherwise, I will faint for good.

So this theory started to make its way into my mind: maybe that painful spot is related to something that shouldn’t be there, like a lump in the carotid artery?  And this lump would somehow press the carotid artery, even slightly, and that’s the reason for my headaches?

Hence the appointment with the vascular surgeon to have this checked out. The surgeon examined my carotids areas,  prescribed an echo doppler vascular echography , and gave me an explanation to the near fainting episodes: when touching that area, I am essentially reducing my heart rate to a point where I will blackout. It’s an advice that the vascular surgeon gives to people having tachycardia (heart beating too fast): stick your fingers there, and the heart will slow down.

Anyway, that’s the only outcome of this visit to the vascular surgeon: the echo doppler I made a few days later didn’t show anything so…another interesting checkmark: my vascular system seems to be ok; I still don’t have an answer to my main problem but at least I know i’m not at risk of a stop cardiovascular disease, which was really freaking me out.

I was hoping he could find something that would cause the headaches and neck pain so, I go to that appointment.

The stomatologist listened carefully, took some notes, and then he examined me.

It’s pretty brutal! He puts on a rubber glove then sticks his hand in my mouth and starts shaking it, twisting my jaws, pulling them apart & always asking if that was hurting and hell yes, that was hurting, but not enough to suggest any jaw-related issue.

So he said: “I could prescribe some medications or expensive devices to put into your mouth at night, but from what you told me and from what I see, your neck problems and headaches are related to a poor posture.“

And I thought “Damn, again with the poor posture! Is this an argument every doctor pull out of their pocket when they don’t have anything else to say ?”

And by the way, I’ve had serious back problems, herniated discs and degenerative disc disease: I am aware that I have a poor posture. I just can not believe it ‘s been the cause of my constant headaches and neck pain for so many years.

On the other hand, what is the point of seeing all these doctors and not listen to what they have to say? Wouldn’t that be the stupidest thing?

Physical Therapy with the Mézieres method

So, I took an appointment with a physical therapist referred to me by my neurologist. He said that this physical therapist had had good results in treating migraines and neck issues related to a poor posture.
She is a practitioner of the Mézieres method which is physical therapy based on postural reeducation to release muscle tensions and correct deviations of the spine.
Sessions last like a whole hour, and I had my first session last week.

For this first session, there was not much physical activity, but a lot of talking. she asked many questions about my lifestyle, my job, my past medical conditions, then she said: “I’m going to examine you, just stand there, look straight in front of you and turn 90° when I ask you to.”
She was taking notes while I was standing and turning.

At some point, she stopped writing and said: “Well, I’m not surprised that you have so many problems: you have forward head posture, sir !”

So I’ve already had two sessions with this Mézieres therapist, and to my surprise, she’s already given me a couple of very effective quick wins that make my life somewhat easier since I’ve already got some relief from my headaches and neck pain.
Forward head posture is a condition where one has his head hunched forward constantly: head not aligned with the shoulders (which in my case where quite far behind) and head not aligned with the body either.
This creates tensions in the neck, and there are the causes of my neck pain and headaches.
The therapist asked me to do this stretch a couple of times a day to fix my forward head posture. It seems to be a pretty famous stretch since I found a video on Youtube of a chiropractor showing how to fix a forward head posture with the very same stretch.

The thing about this stretch is: it’s not easy to keep the correct posture for several minutes while doing the stretch.
I found out that doing this stretch in the car while driving is quite effective, and the stretch can last much longer than while doing it just standing.
I push my lower back against the seat, my shoulder also against the backrest, my head against the headrest, and then I do the stretch, and I can keep driving.

Second quick win the therapist gave me: she says I have this tendency to keep my shoulders elevated, for some reason: my shoulders are consistently tight and above the base of my neck.
As a matter of facts, I was walking down the street yesterday, and I suddenly realized that.

Why do I do that? I don’t know yet, but I’ll find out.
In the meantime, I try to pay attention to my shoulders, to keep them falling down, including when I’m in bed. And this means: not putting an arm under my head or above the pillow like I used to do. Even in bed, shoulders need to stay below the line of the base of the neck.

I did that last night, and as a matter of fact, I did not wake up from the pain in my neck during the night.

So, it’s still a very complicated solution, but I think I have something to work with and try to make it better. 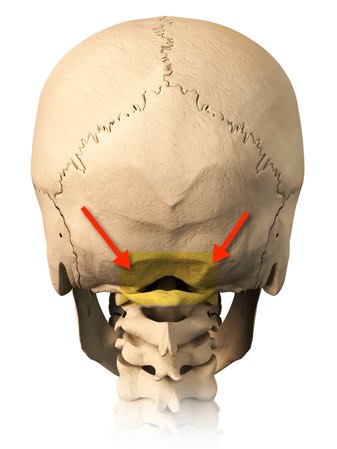 2 thoughts on “Forward head posture is the cause of constant headaches & neck pain ?”